Home / Products / The Perfect Silicon Sphere: one kilogram (Last Ones!)

The Perfect Silicon Sphere: one kilogram (Last Ones!)

Our Quest for the Perfect Silicon Sphere

In the early 1990's a team of scientists from around the world began a project to redefine the kilogram standard of mass known as the International Avogadro Project. This resulted in the world's roundest object, a perfect sphere of crystalline Silicon. When we saw one of these $3.2 million dollar works of scientific art, we knew we needed to have one!

We wondered: Could we use our expertise in making perfect metallic spheres to create a silicon crystal sphere without spending millions of dollars?

We wondered - could we take an off-the-shelf single crystal of silicon and make our own sphere? We have made thousands of metal spheres in the past, but silicon was a metalloid (more below) and needs different tools to shape into a sphere.

The original kilogram prototype sphere was 93.75mm in diameter, but only consisted of silicon-28. A kilogram of silicon-28 goes for about $1.5 million, so we needed  a more reasonable alternative. Our sphere would be off-the-shelf crystalline silicon used in making computer processor chips (thank you computer industry!). These mass-produced crystals have the following distribution of isotopes:

That means if we made the exact same size sphere, it would be heavy by about 0.39%.

A Lesson in Stonework

First lesson, this is a LOT tougher to shape than metal. Each metal we've worked with has it's own unique characteristics, but this was a different beast entirely. A metal sphere can be shaped in an hour in some cases. This is what our first attempt looked like after an hour of cutting:

Since Silicon is a metalloid and has some similar properties to stone, we decided to use some stone-working techniques to get the basic shape.

Eventually, we got a sphere:

Our first few prototypes make smooth-to-the-touch spheres, but they were quite dull. It took many tries to choose the right cutting blade and get the smoothness right. Choosing the right kind of material for the cutting blade was critical.

We initially used stone-polishing processes used for making decorative granite spheres. That gave us the shiny surface we were looking for, but it still didn't rival the finish the scientists were getting with their $3.2 million dollar spheres. We weren't happy yet!

We altered the process somewhat and increased the polishing time to three days(!). We were definitely getting closer to the desired results:

This series of prototypes was shiny, similar to what you'd find with polished granite. However, it didn't quite meet our standard that we use to judge our metal spheres, so we kept trying to improve the finish.

After months of struggling to improve the stone polishing process, we had an insight. The scientists who made the original sphere used a lens grinding factory in their final polishing step. We always assumed this would be much too expensive, but after some research we realized it might be the solution we were looking for.

We found a factory that specializes in making custom lenses for the aerospace industry. They were willing polish one of our prototypes. Everyone was shocked at the result.

These look so incredible with a breathtaking luster you have to see to believe.

We were able to achieve a sphere that rivals the original luster in a single crystal of silicon.

Ok, why doesn't it cost $3.2 million like the original?

The original sphere used an extremely rare single-isotope crystal of Silicon-28. The material itself cost $1.5 million, while off-the-shelf silicon crystal are commodity items for the chip-making industry and can be had in the $100's of dollars range. The other huge contributing factor is the accuracy with which the scientists were trying to achieve.

They literally made the roundest object in the world after weeks of polishing in a lens-maker laboratory. They wanted accuracy of +/- 0.0000002 grams. This is impossible with any off-the-shelf solution and required constant laser measurements. So far, our accuracy is about +/- 5 grams, which isn't useable as a mass standard, but perfectly wondrous as a beautiful heirloom piece.

Silicon is a metalloid. It is one of the few elements that are not metals or nonmetals. It has an atomic number of 14. It its crystalline form, it is a dark shiny grey with a luminous undertone. It is also a semiconductor. It is able to act as either a conductor or a non-conductor. This has lead to its widespread use in electronics.

Silicon makes up about 25% of our natural world. However, it is never found in its pure state. To get pure silicon, it must be carefully refined.

For those of you interested in a more affordable sample of Silicon, we're offering a salvaged shard of pure Silicon in our InvisiDisplay™ case:

Who is Trance Metals?

Trance Metals is a Texas-based company that specializes in aerospace-grade spheres. Our Copper & Titanium spheres project raised over $500,000 here on Kickstarter! Since 2015, we've produced over 30,000 aerospace polished metal spheres in Copper, Titanium, Tungsten and other metals.

Trance Metals is the first company in the world to mass-produce mirror quality spheres in Copper and Titanium. We’ve learned just about everything there is to know about manufacturing the highest quality metal spheres.

Trance Metals raised over $50,000 to bring this sphere to life on Kickstarter. Get yours now before they are gone forever!

Amazing to see in person. More beautiful than I expected!!

Thank you Joseph! The Silicon Sphere is quite a sight to behold, it never fails to impress. :)

The most amazing thing I've ever seen. 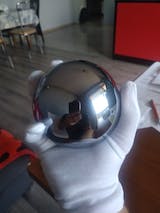 <p></p><p></p><p>Thank you Łukasz. :) What incredible pictures! This was one of the most difficult Trance Metals projects to date, so hearing you say that the Silicon Sphere is one of the most amazing things you have ever seen is incredible! We hope to welcome you back to Kranite.com soon. :)</p>

Love it!! 🤗 This is the second product I've purchased from Kranite. Beautiful. 🙏 As a machinist by trade I have a deeper appreciation of metals.

Thank you for your review Sheldon, we are so happy to hear your glowing feedback. We hope to warmly welcome back to Kranite.com soon. :)

Just received my Silicon kilogram Sphere it is absolutely BEAUTIFUL, Fascinating to ponder over, put on the included white glove to handle, it is irresistible to hold....stunning work of art. Friends are fascinated by it.... looks amazing next to 1 kilo copper sphere and especially the tungsten sphere. The size to weight ratio of the two is a trip

<p>Hello Gary, thank you for taking the time to leave your review! Our metals are the result of an incredible amount of team effort and meticulous workmanship - your feedback really means the world to us! We hope to welcome back to Kranite.com soon. :)</p>

I've eventually got the 1kg silicon sphere and this is beautifully bluish and astonishing. The size is very large according to the density of silicon. Now I have a collection of three elements, that is 1kg of tungsten, cupper and this silicon. Looking at those in one glance, I feel mesmerized by the difference of those sizes of elements, and am surprised every time when I pick up one of those elements because of the pressure on my hand. I really recommend to get 1kg silicon sphere as well as the other spheres to those who love the rare metal materials. 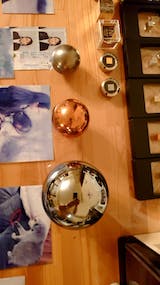 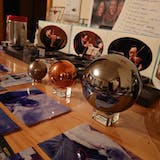 Hello Hirobumi GUNJI, thank you so much for your review! Your collection is looking absolutely incredible. :) Each of the spheres are mesmerising in their own, unique way so seeing them all together in person really is something else! We are delighted that you love our work and thank you again for choosing Kranite.com for your exotic metals! :)

I have never seen anything more reflective and polished.

So happy to hear this Cabe. Thank you! :)